CITY OF BIRMINGHAM ROCKETS BASKETBALL CLUB > News > Latest News > Coach Douglas: “There Is Still A Lot More To Come From This Team”

Coach Douglas: “There Is Still A Lot More To Come From This Team” 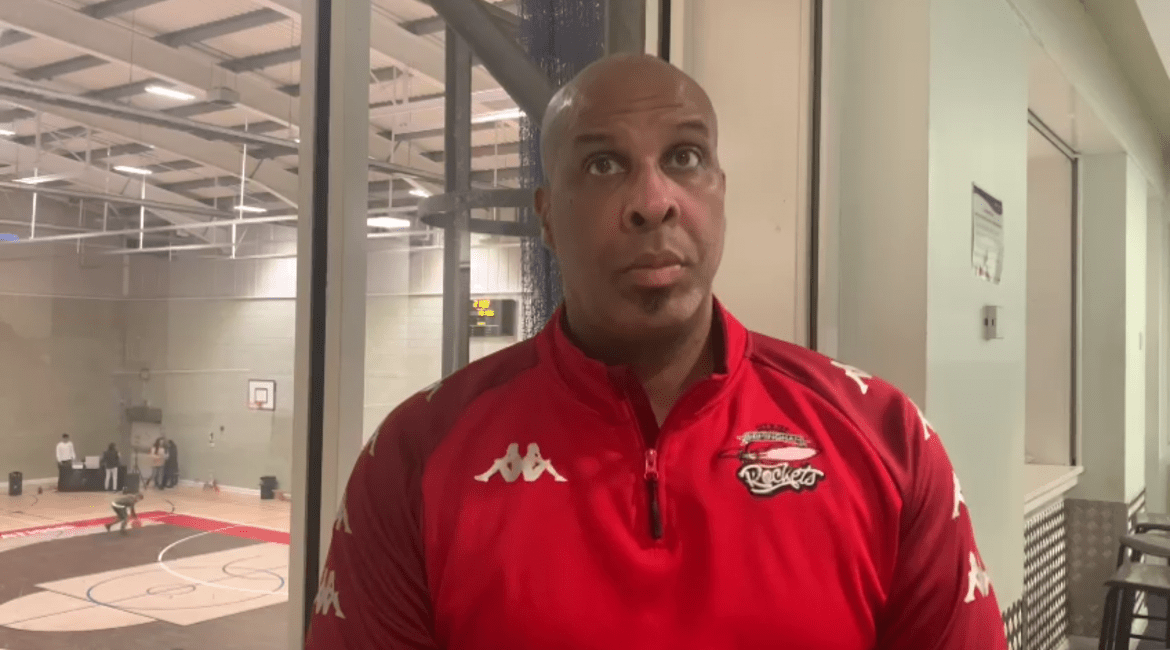 We caught up with Men’s First Team Coach Paul Douglas after Rockets’ 87-52 win over Bristol Hurricanes on Saturday.

Coach Douglas gave an honest assessment of his team’s growing confidence as the season has gone on, while also highlighting that the team can improve further.

“We played really well – I tried not to be a bit disappointed with the first half, we made a few errors with our defensive assignments and some of the things to do with offense, but once we had a good shot and had a though about what we were trying to do and the team we were playing against, we just thought it was going to be one of those days. Luckily for us, we kind of broke their back a little bit.

“They were missing shots and we capitalised on it – we got out on a fast break on multiple occasions. Faaris was great on the offensive game – he kind of like kickstarted the ball for us, then once we got going that way it was hard for them.

“I think they missed something like four or five shots in a row then we got some turnovers, we came down and we capitalised on it. Some of the dunks that Mike got really fired up the crowd and just rolled that energy.“

A diverse Rockets scoring display saw a wide array of scorers on the night, with the spread of scoring across the roster something Coach Douglas is keen to see continue going forward.

“It’s unfortunate that Elvis went down with that bad shoulder injury, but everybody on the bench stepped up. If you look at our bench scoring, we’re scoring something like 20 to 40 points of the bench, and we must have been close to that today as well.“

Coach Douglas also praised the crowd – with the game coming close to a sell-out and a raucous atmosphere throughout helping the team to our biggest victory of the season.

“The crowd was unbelievable – at the start we were getting some indifferent results, but the one constant thing is that the crowd’s always been great. And I think that we gave them something to cheer about. Jordan Dawes said that the crowd deserves a big win today, and we stepped up and gave it to them.

But Coach Douglas also sees space for Rockets to improve – and spoke of the areas of focus as we look ahead for the rest of the season.

“If I can be critical of our game, it was there was a lot we didn’t do that we practiced in training this week. I feel if we’d done that, to the standard that I know we can, then we would have broke over 100 today, no doubt. We’ve got to be a bit more methodical in what we do, we have to communicate better, but I think that today have given us a glimpse of what we’re capable of and we’ve set a standard for ourselves which we’ve got to beat every time we play.

“So there’s some things I’m not happy with, some fine tuning, some work we need to do in training, but on the whole I’m extremely happy with the performance. I’m pleased for the guys, I’m happy for the fans. I thought we came out and we bossed it today. We had to grind out in the first half. But the character of these guys, the character of this place, it came through.

“I’ve been around a long time and we’ve only won two games on the trot and it’s great to do that, but there are no easy games. We won by 30 today – that was a bad day at the office for them. I think they’re better that they showed. There are no easy games, you’ve got to fight for everything, and I think our next game is gonna be a tough one.

“Our concentration is gonna have to be at our upmost for the whole game. It’s great to get the win, but it’s going to be an uphill battle, but as long as we keep on improving and getting results like this, we’ll do ok. There is still a lot more to come from this team, because I think we’re actually playing at about 60%.

“We’re getting a sense of what they’re capable of, so we’ll be alright for sure.”

Our next home game is in two weeks, when we play at home to ENCON Derbyshire Arrows at 7:30pm, after the Women take on Nottingham University Wildcats at 5 – GET YOUR TICKETS HERE!