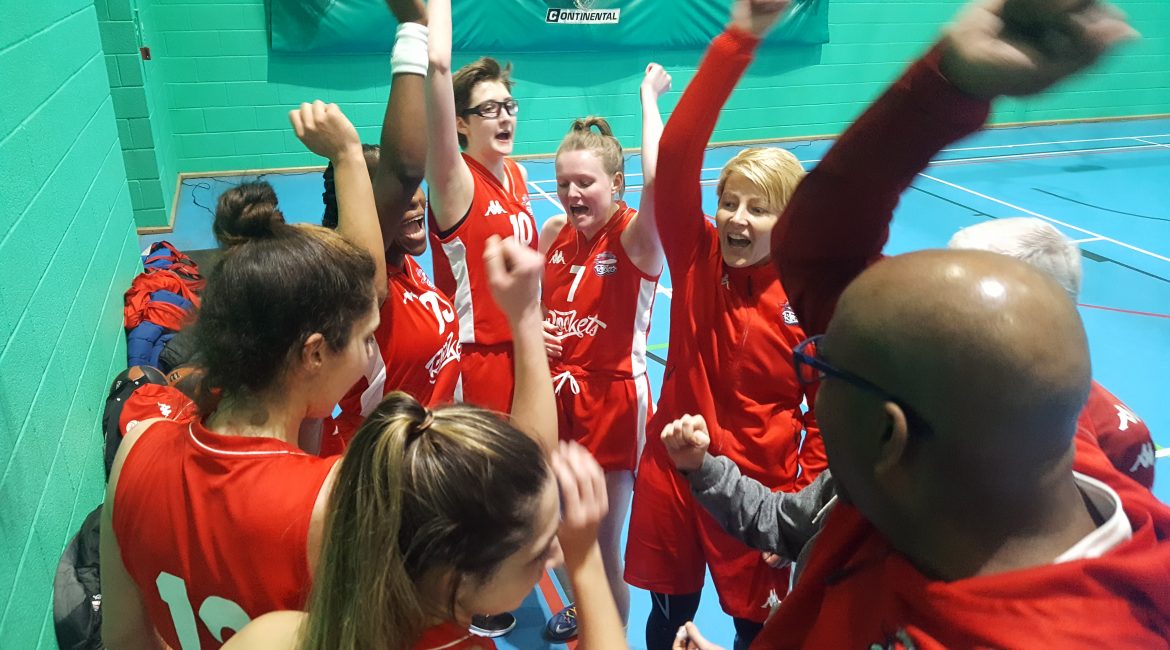 Rockets raced into an early lead, with Sandra Hewakowski scoring a pair of twos in the opening minute to put Rockets 4-0 up.

A great interception from Felicite Umuhoza then allowed the returning Michelle Turner to go clean through to score her first points of the match and put Rockets 6-2 up.

Derbyshire pegged Rockets back with some good attacking play to draw level before Hewakowski and Turner again restored our four-point advantage halfway through the first quarter.

However, our hosts showed their resolve to come from behind once again, with the scores level at 12 all going into the second quarter.

Derbyshire made a quick start to the second quarter, quickly building a four-point lead before the ever-influential Turner and Hewakowski combined again to level things up.

Rockets’ good attacking play under the basket was then rewarded with as a free throw from Umuhoza, whilst Milly Harrison and Turner combined to put us ahead 24-18.

The game continued to be tightly fought, with both teams enjoying short spells in the lead and neither side able to pull away and consolidate an advantage.

However, a Diamonds run to end the second saw them reach the interval with a five-point lead.

Rockets looked to make amends as soon as the third quarter began, with Michelle Turner hitting a pair of twos, before a couple of free throws from Enke Pashaj and another two from Turner put us ahead.

A three from Felicite Umuhoza then put us 42-38 ahead, before Oliwia Ptaszyk got in on the action to give us a six point advantage.

Diamonds looked to chip away at our lead as the quarter reached its climax, but further points from Turner and Hewakowski gave us a 51-47 lead going into the final quarter.

The fourth quarter opened with high energy from both teams, with Rockets sensing a first win of the season was within reach.

Diamonds were able to take a four-point lead with five minutes left to play after a strong start to the fourth, but the ever-reliable Turner and Umuhoza levelled the scores at 57 each.

Turner then scored a three with two minutes to go to give us a slim two-point advantage going into the final moments before Harrison then hit another two to seal the win; giving us a deserved victory that will undoubtedly live long in the memory.

Rockets next game is at home to Tees Valley Mohawks on the 29th of January and Coach Peter’s side will believe they can now secure their first home win of the season, so make sure to be at Nechells Wellbeing Centre and get behind your team!